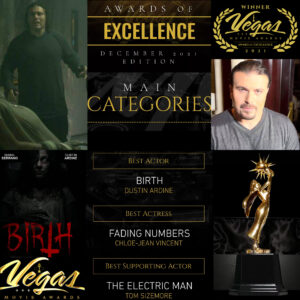 Dustin began his journey in entertainment by performing in musicals, theatre in school, and local acting companies. Dustin Anthony Serrano was honored by his grandfather, William Ardine (a WWII Air Force veteran), to use his last name to carry on his lineage.  Dustin legally changed his name and made his grandfather proud by being dedicated to his work.

Dustin has starred in the award-winning feature film Ariadne, played Rose in the well-received Chinese feature film Los Angeles Kidnapping, and was the male lead in the horror film Birth.

Dustin has appeared in dozens of TV shows, commercials, and independent films. He has starring roles with upcoming film projects, Religion, and Proving Ground.

You can be a part of the red carpet screening of Birth and the Special Award Ceremony at the Indie Night Film Festival in Hollywood on Saturday, December 18, 2021, from 2:30- 5:30 pm. This event will be at the famous TCL Chinese Theatre, Hollywood and Highland Center, Level 3, TCL Chinese Theatre 6, 6925 Hollywood Blvd, Hollywood, CA 90028. Parking is at Hollywood and Highland Lot and is $3.00 for up to 4 hours (with validation). To receive your private invitation and ticket access, contact his publicist below.

Dustin is available before and after the ceremonies for interviews and photographs. For one-on-one interviews, bookings on podcasts, or other guest appearances, contact his publicist, Rebecca L. Mahan, 254-350-4250, or email rebeccamahan@publicist.com.

Please send your “Congratulations” to Dustin on his FaceBook page and get involved in his exciting journey!