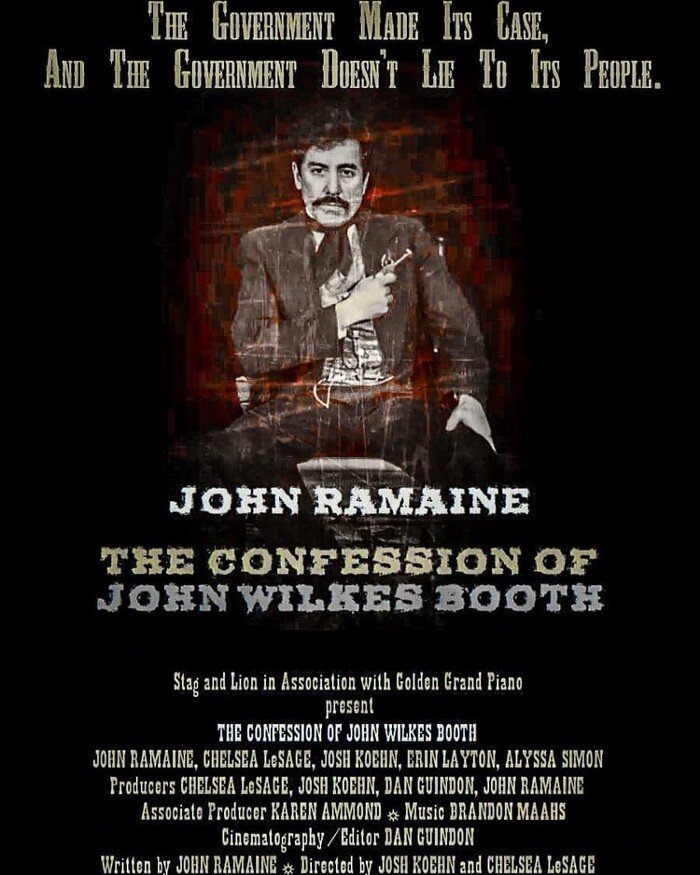 THE CONFESSION OF JOHN WILKES BOOTH

The Government Made Its Case

The Government Doesn’t Lie To Its People

June 23, 2022,  New York City– Actor, Screenwriter, and Author John Ramaine created a possible ‘What if” scenario of John Wilkes Booth and his survival many years after being presumed dead by the government. The release of the production THE CONFESSION OF JOHN WILKES BOOTH is streaming the stage version of the production directed by Stag and Lion’s Artistic director Josh Koehn and Chelsea LeSage of Golden Grand Piano. John, Josh, and Chelsea also produced and had significant roles in this fascinating ensemble.

The project’s mission is to reveal a plausible truth hidden in history for over one hundred and fifteen years. While fleeing capture, Booth hears the report that he was trapped and shot at Garrett’s barn by Boston Corbett. The man found in the barn had Booth’s diary. He declared to be Booth. The case is closed. The project was given permission and blessed by surviving members of the Booth family members to proceed with this venture.

“History and its seeming settled particulars can only change to be better if the people who govern over us are willing to listen to possibilities.

I would like to see healing begin that is long overdo. If art has taught us anything, but to think on things, then it will have achieved its grandest goal.”

The venture saw a couple of challenges during the pandemic. Casting faced people not ready to come out of their homes. However, this did not stop the team from the core objective. They filled the roles. Then a week before production, the star of the show, John Ramaine, suffered a torn stomach lining. Reluctantly, he was admitted to the hospital. John was unable to ingest food for four days and dropped 22 pounds. However, his spirit was determined to bring the “what if” scenario to life. In a crusade for healing, his wife enlisted many from around the country into a prayer chain. Miraculously, his final x-ray revealed no signs of illness. The show had to go on! John regained his momentum and delivered an engaging performance.

From story-line to production to performance, THE CONFESSION OF JOHN WILKES BOOTH continues to draw the attention of many. The film is available on Popsy, Plex, Tubi Xumo, IBCN, OverDrive, and Vimeo.