Rebecca L. Mahan is focused on ensuring each episode delivers enriching content to entertain and inspire the audience with interesting guests and resources to help move lives in a healthy direction

She is a United States Marine Corps veteran and a retired police officer of over 10 years. Rebecca is a published author and had been a long-running columnist for a community college newspaper. She has also been an award-winning radio show host and has produced, booked, and interviewed guests for her shows.

Her education includes: Associates degrees in Christian Studies, General Education, General Business Management, and Law Enforcement. Rebecca also has a Bachelor’s degrees in Church Ministry and Occupational Studies -Vocational Arts, as well as a Master’s degree in Biblical Studies. She is a certified Mediator, Event Planner and Photographer.

Luca Majno is the CELEBRE MEDIA VIP, LLC AudioTechnical Editor Consultant, Host of LEARN 2 UNLEARN, and CO-Host of GLOBAL NEWS UPDATE, an investigative journalist, researcher and passionate advocate of Indigenous People (The Original People), of their ‘Turtle Island’ which is now North America. Born in Boston, Ma. and raised in Geneva, Switzerland, he has lived for the last 25 years in Canada, where his activism started, and has since lived in Tennessee and Keokuk, Iowa, where he now resides. Exposing past and present crimes of any nature is a sure way to change the course of humanity towards a brighter future.

The Jimmy Star Show (www.JimmyStarsWorld.com) is tv/radio’s coolest syndicated entertainment, music, fashion and pop culture show hosted by none other than the Celebrity Renaissance Man and King of Cool, Dr. Jimmy Star, and his Outrageous Cool Man About Town Ron Russell!! In each live two hour tv/radio program, Jimmy Star and Ron Russell have a blast talking with celebrity friends/ guests and bringing you the Good Times with industry insider ideas along with cool music, movies, tv, and pop culture previews.

The Jimmy Star Show is the #1 Webshow in the world with over 4.5 million listens/views per week. Quite an accomplishment as there are well over one hundred thousand shows on the internet, and we have more listeners/viewers than the Nerdist… We are syndicated in Florida, Michigan, Washington DC, New York, California, South Carolina, Pennsylvania, Indiana, Missouri, Ontario, New Jersey, Belgium and London.

Jimmy Star was named the 5th most influential radio personality in the world. 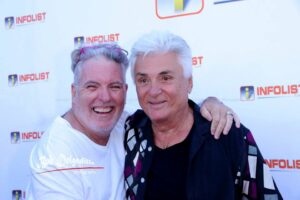 Kadrolsha Ona Carole has made comic book history by becoming the first person to be a comic book Superhero doing what she does in real life between the pages of a comic book.

Comic historian Brian Morris plus Comic book publication owner Charles Moisant of Silver Phoenix Entertainment confirm Kadrolsha Ona Carole is the first in comic book history to be a comic book Super Hero doing what she does in real life. Her historic comic book status debut was in “Haunted Tales of Batcheldor’s Grove” Given this fact she has brought the paranormal industry mainstream with her accomplishment. She is the real deal of Comic Book Super Heroes! Stories carried in The Huffington Post, New Hampshire Magazine, Telegraph, New Hampshire Chronicle Televisions show and more along with many many news media outlets. Her new comic book is Kadrolsha Ona Queen of the Paranormal in “The Healing.” Kadrolsha travels the globe giving lectures, making appearances, doing reading & healings and sharing her vast paranormal knowledge.

KO  hosts Paranormal 13 News (P13N) on the Galaxy Global TV Network, Roku plus many more and in 198 countries, 50 state,  Comcast Big South and in airport televisions services worldwide. Airing on Nov. 13, 2018. Since P13Ns debut it has won an award for being the fastest-growing paranormal news formatted program since its debut says Galaxy Global Televisions Network! Paranormal 13 News is the first paranormal program to be seen on Airport Television.

Kadrolsha is collaborating on a children’s book with the legendary Bill Diamond of Jim Henson and the Muppet’s and she played a pivotal cameo roll in the Toxic Tutu movie. A movie continuation of Toxic Avenger.

Stared in the Silent Film “Silent Times” which she won an award for her role of Madam Leonora and was featured in Broadway World Magazine.

Kadrolsha’s  Is an Award Winning International Executive Film Producer for Tageteam Friendship Productions LLC and Killer Bees film Productions, LLC. She sits on the board of director for both of the film production houses and is their New Hampshire Representation.